We should be seeing from Nicole on this episode; will nature reward her for letting the salmon go? Will Jose’s boat stay floating? Will David eat more crabs?

There are 4 people remaining, Nicole, Larry, David and Jose.

“The world breaks everyone, and afterward, some are strong at the broken places.” – Ernest Hemingway

David goes fishing and is catching fish left and right. Why wasn’t he doing this sooner? At least he is going to be eating!

David’s fish get stolen! Or lost… or something… who knows, but they’re gone! He had 2 on the stringer which disappeared. Oh well, at least he still has one.

The next day David says he wants to catch some crab. To do that he must catch some more fish. He goes fishing and he catches some fish! Woohoo Larry.

David rigs up a fish to go crabbing with, throws the line in the water, and, the LINE goes into the water. Oops!! David tries to get the line and falls in the water. OOPS! Not good. David wants the line but decides to get it go as it isn’t worth dying over and he could easily get hypothermia.

Nicole is super excited. She saw a salmon get caught in her gill net! She goes to go get it, and, the deals have eaten her salmon! Doh! What will she do do beat the seal?

The kayak had a hole in it. He has repaired it. This guy’s boat is fast! Jose is looking to catch salmon and harvest as many as possible. He sets sail to a river where he is hoping to find the salmon on a river. He arrives, but sees no salmon. Uh oh. Is he too late? He also went over 1.5mi and the TV show keeps pointing that out. Is he allowed to travel that far?

Larry stays positive by building a spoon. Cool. I want to build one of these sometime. 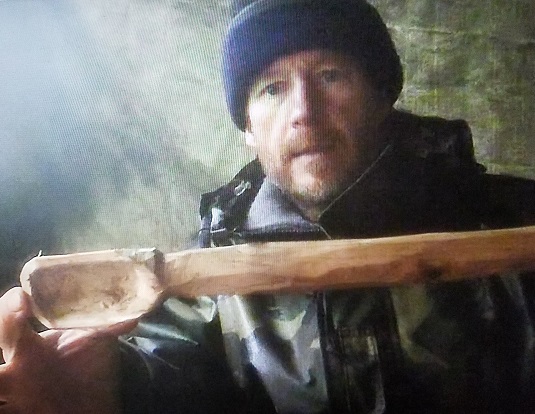 The battle continues. The seals have trashed her gill net. I think it is time Nicole begins looking at a sustainable source of protein. Won’t the salmon run be over soon?

Jose decides to diversify and builds a lure and a fishing pole. He catches a Cabezon! It looks like an ugly scaleless puffer fish.

Larry is having a tough time… It is day 41… He looks whipped! He has been cutting wood- he has a ton of it! Larry says every minute is dragging by.. Larry is alone! I don’t know if I could do it myself…. The show fast forwards to day 49 and Larry is just sitting there watching the rain…

Nicole is pretty darn hungry and takes the bear’s trail to see where they’ve been eating.

Nicole gets to a certain point and feels an eerie feeling and turns around. I would say that was a good assessment!

That’s all for this episode, see you on the next episode.