Alone – The Beasts of Night

Mary Kate taps out this episode, right at the beginning. She cut her hand badly with her hatchet, as seen on the last episode. She has no choice. She can’t move her thumb. That is sad, I had high hopes for her, and I know she is a strong and capable woman. Bye Mary Kate! 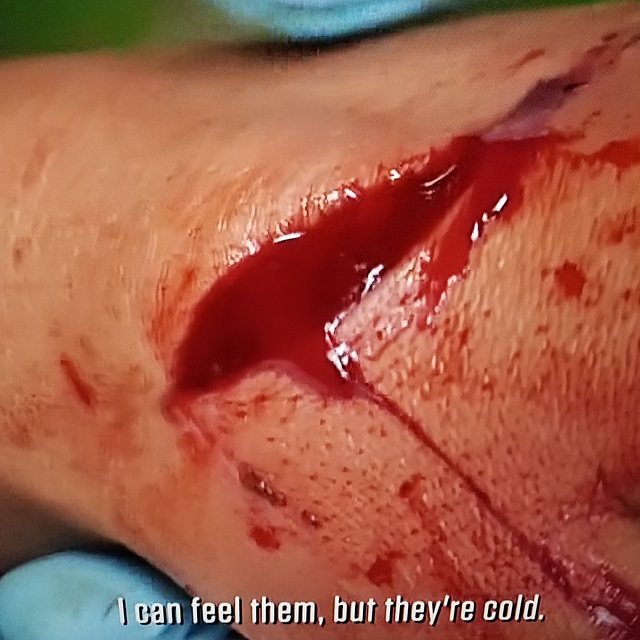 Mary Kate’s badly wounded hand which was hit with a very sharp hatchet on Alone. When asked if the could feel her fingers, she replied with “I can feel them, but they’re cold.”

Randy’s ferro rod fell into the fire on the last episode. He is working on getting a fire going. He’s using a socket rock, spindle, board, bow, and tinder.

Nicole gives us a tour of her home on this episode. She has a beach and a camp which reminds her of her home in Portland Oregon. She points out some nearby bird noises and how she listens to them and the message they are communicating.

Larry  decides to relocate his home up a steep hill. While climbing it he slip and falls and hits his collarbone on a root or stick. He promptly calls it a c**sucking m**herf**ing piece of f***ing s**t *** *** ** *** while angrily stomping on it and kicking it.

Jose is a humble man and has spent time in the woods in North America Europe and South America. Jose says that “humility prevents humiliation”. Great quote. Jose makes a fire blower.

Tracy has selected her permanent home and sets out a gill net.

Nicole is busy adding debris to her hut when she hears a hideous growling noise. She goes looking for it and discovers a bear across a pond or lake from herself. She is eating away on some salicornia and wonders if the bear is eating the same thing as herself.

Randy is trying and trying to get his fire lit using friction. He locates the perfect rock for it and after several hours of effort he finally gets a coal.

Tracy checks her gill new and in it she has a crab and a fish. Before going to bed she tells the camera a story of her days in law enforcement. Before going to sleep, something is outside, snapping twigs, breathing heavy, and sniffing her head through her tent. I can’t believe how chill she is. And, holy cow, it’s a bear! It’s a few bears! She lights a flare and blows her air horn and tries to chase the bears off while yelling at them. Just as the episode gets crazy, it comes to an end. I guess we’ll find out what happened on the next episode!