Alone – Adrift is season 2 episode 6 of “Alone” and is playing on May 26 2016. I will update this page while “Adrift” airs. I’ll also be on Twitter commenting @Lenraleigh w/ hastag #AloneShow.

Please feel free to comment at the bottom of this page with any of your own observations.

Each show gets a quote. This episode’s quote is:

This episode begins on day 15. I have been waiting all week for this episode. Will Larry have a bad attitude? Will Nicole thrive? Will we get to see Jose? Will Randy’s fire go out?

Mike builds a boat or finds a box to sail around in and celebrated. Honestly, I was too busy typing here to notice how he obtained this boat. 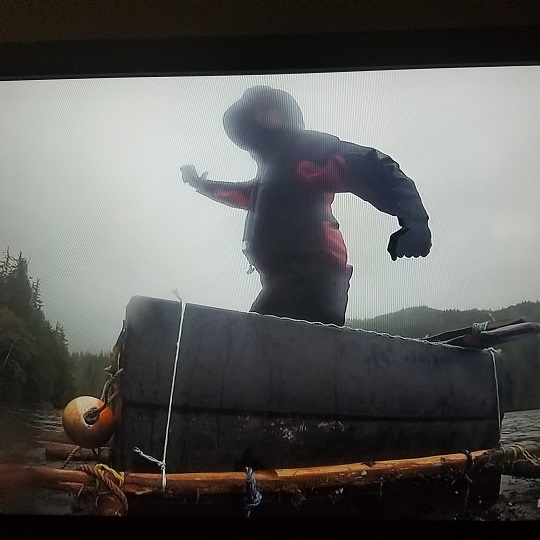 Mike dancing around on his boat

Larry catches a fish and has a tough time getting his fire going. Larry has a tantrum and starts cussing like a sailor! I don’t think that Larry is going to last very long with his attitude.

Jose is indeed on this episode. Go Jose! Jose is spending some time working on a boat. What a great idea. Will he get it done?

6.8 miles away is Larry who is complaining about a mouse. He says if the mouse gets in his way he will blow up Vancouver Island. He is looking a bit depressed. I think Larry needs to move. Will he?

Larry seems to be having a little epiphany here! He says it’s him that needs to change, not the rest of the world!

Nicole, who’s on Twitter right now as I type @NicoleApelian, is adapting to the black bear’s schedule. She has caught another monster salmon. I love how she has respect for the animal and wants to use 100% of the salmon.

Larry must have been listening to me. He packs up his stuff and moves. Will he be rewarded? Sometimes you have to go with your gut.

Larry begins his trek through the woods and finds the ocean. He is very happy with his finds and begins setting up a new, significantly larger shelter.

Uh oh, the length of Larry’s wood is 4″ too short and he’s freaking out again! lol.

Randy seems to be having a hard time staying alone and missing the companionship of others. But, he’s catching fish! I have pretty high hopes for Randy. He looks like he will do well. Can he beat Nicole, Jose & Mike? Time will tell! Randy caught some really strange ratfish.

10mi from Randy is Nicole. Nicole discusses the drowning of her stepson which is sad. She is alone with her thoughts.

Who will last the longest from this episode?

Which contestant from *this episode* of #AloneShow will last the longest?

Fixed: Which contestant from *this episode* of #AloneShow will last the longest?
(added Mike, removed Randy)