Trial by fire was season 2 episode 7 of Alone which initially aired on June 9, 2016.

At the beginning of each episode there is a quote. The quote for this episode was:

“In nature there are neither rewards nor punishments; there are consequences.” –R.G. Ingersoll

Randy taps out. He made a neat sweat hut and was at peace with his decision. I think Randy could have stayed but he wasn’t sure what he was doing there. Dang dude! I hope he finds another way to make $500,000.00 in a few weeks. 🙂

Mike taps out. Mike had built everything, even the kitchen sink! Mike couldn’t take being alone any more. I think it is great that he loves and misses his wife so much. I’m suprised this guy didn’t have a deck and a rocking chair. Mike had football games, bowling, a hand washing station, a grilling area, dice – you name it. This guy is really good with wood. 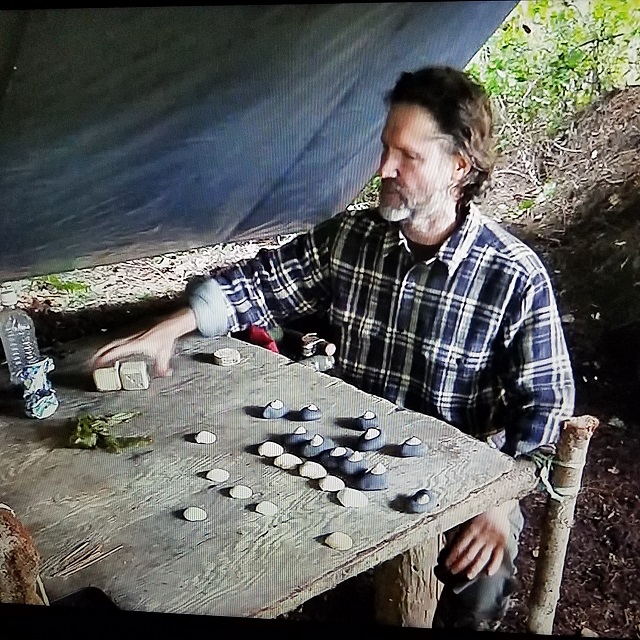 Here’s Mike, reaching for his dice while having a game of “football” at his table..

After Randy and Mike are gone there are 5 contestants remaining.

Larry is happy with his move. He is finding chanterelle mushrooms all over. Larry wakes up very happy that he didn’t have to wake up early and on a schedule.

Larry goes out to check his fishing lines and they are stripped clean. Larry is going to need some food soon! He is a bit frustrated he has no fish.

Larry sets up his fire in a tree beside his camp. In a hollow tree. The trunk of the tree catches fire! whoah Larry!