The Madness!! 5 people remain on Vancouver Island. “The madness” is season 2, episode 9 of History’s Alone show and originally aired June 23 2016.

Pre-episode questions: Will David catch fish? Will we hear from Larry? Will Nicole stay safe from the bears? Will Jose sail away in his Kayak?

I personally wonder if some of these people shouldn’t be preparing for longer term survival.. Hmm..

“Look deep into nature, and then you will understand everything better.” – Albert Einstein

The episode begins with David. Savid just saw a ferret run by with an ell. He is going to eat some bull kelp, which is high in fiber. This may help with David’s constipation.

Larry! Larry hates mice. But, he is going to set up some mouse traps. Larry doesn’t appear to be very good at setting up all of the mouse traps but he is determined to catch something in his paiute deadfall trap.

Jose takes his kayak out. It is totally awesome. Well, almost, it is unstable.

Larry had tweeted earlier in the week that he “had” to cut the mouse’s throat. No problem Larry! So- Larry was getting ready for bed and the trap went off. It somehow escaped, then Larry tried to stab it, and it got away again, and he finally stepped on it and cut its throat. Larry has caught the mouse! Yay Larry! I am glad to see Larry gettin’ some food!

So…….. David man, are you nuts??? Seriously…. David has been starving and losing weight… On the last episode he had just said he “was drawing a blank” on food…. Then he says the only thing he can catch is crabs.. And then he explains how he used to catch them as a kid… So he goes and catches half a dozen crabs! WTF David?! Why didn’t you do this a WEEK ago?? Anyways, there is probably more to the story than we’re seeing on TV. That, or David is cray cray. Anyways, David is happy to have crabs! 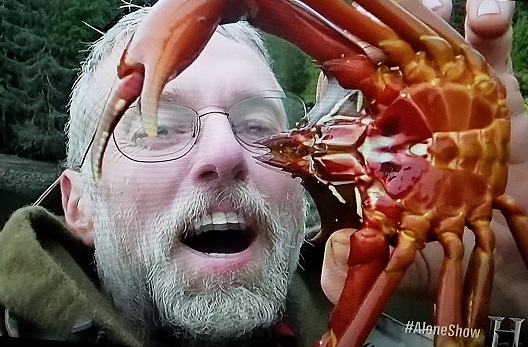 Larry has an excellent night of fishing and trapping. Surf and turf! Larry is super excited, and positive! He has successfully caught a mouse, a pot full of crab, and a fish. Larry cleans the mouse, and by the time he is done, he has another mouse. Sweet, Larry!

An answer to Jose’s prayers. Jose’s kayak wasn’t great- it needed something on its side. And, up washes a floaty thing which will be PERFECT for his watercraft.

Justin has a sustainable food source – snails. Justin has been working out.. Is using those calories such a good idea? I’m not sure if he is going to make it. Justin points out that in the military they are given SERE training: Survival, Evasion, Resistance, and Escape; essentially that is surviving for 3 days and not about long term survival.

With all of the time Justin has on his hands, why doesn’t he build up a better shelter? I don’t think he plans on staying very much longer… He has already done a great job…

Day 35, Justin is done. He leaves with some words of wisdom… “Enjoy yourself now and if something is keeping you from enjoying yourself … get rid of it.”

I’m jealous! He wants to get rid of “stuff” in his life. Sounds good to me!

His kayak is working and the episode ends.