In this episode, originally airing 8/2/2016, Bear Grylls and Julianne Hough are in the African Savannah. This is season 3, episode 2.

Bear pulls up on a 4wheeler and soon the fun begins. They are going to navigate across some flat terrain and down a cliff, camp out by a river and climb up a mountain to their extraction point.

So they start off and early into their journey the find some elephants. Bear says they want to stay far enough away from the elephants so that they don’t get killed. He finds a warm pile of elephant poop and him & Julianne squeeze water out of it into a canteen. It is green. And still hot. Bear takes his poop covered hands and paints some battle stripes onto Julianne’s face! hehe

Later they scale down a cliff. They survive. Once at the bottom they see some mountain lions in the distance. They stay at a distance and sneak away. They find a cave and there is a snake inside. Bear is happy that they have food, but Julianne says she isn’t going to eat the snake. Come on, girl! Maybe she has brownies in her pack, who knows. Anyways, Bear tells Julianne if she touches the snake he will let it go. She does! hehe

Later they set up a camp. They get a fire started and Bear goes hunting. He finds caterpillars that he wants to boil in elephant poop water. Are they going to eat it??? There is water right behind them….. According to the TV show anyways…. They eat the caterpillars and drink the elephant dung water! 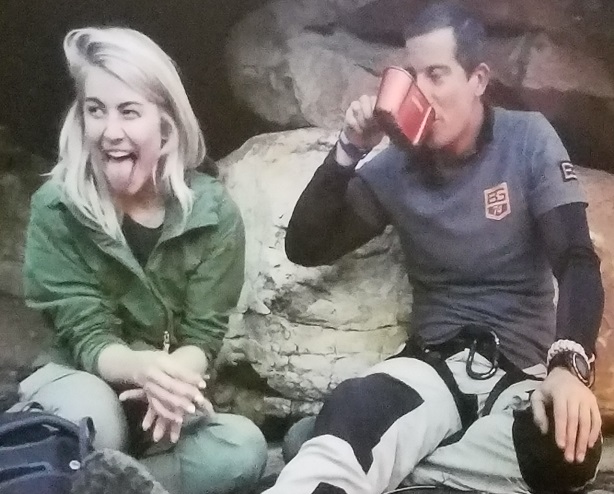 They wake up looking good. I think someone just did Julianne’s makeup, that or she just looks good after a night of sleeping on rocks after eating elephant sh*t. Not sure which it is.

On the next part of their journey they have to squeeze under a rock. I am not claustrophobic but I wouldn’t go under that rock. Not that I would fit in the first place!

They encounter some cave paintings. How old are they? Bear says they could be tens of thousands of years old. Are they? Hmm…

They get to the end of the journey and there is a ladder in place. Bear put it there when setting the show up. It does not look like an easy climb.

They make it up to the top. Julianne Hough says this has been the journey of a lifetime. Very cool. A helicopter comes in to pick them up, but Bear has one last adventure planned. They attach to the chopper via a rope and dangle under it while the helicopter flies out! WTF?!

I’ve never seen Julianne Hough before, but she seems like a really positive and nice person. Bear reinforces this with his closing statements. Neat! I liked this episode.