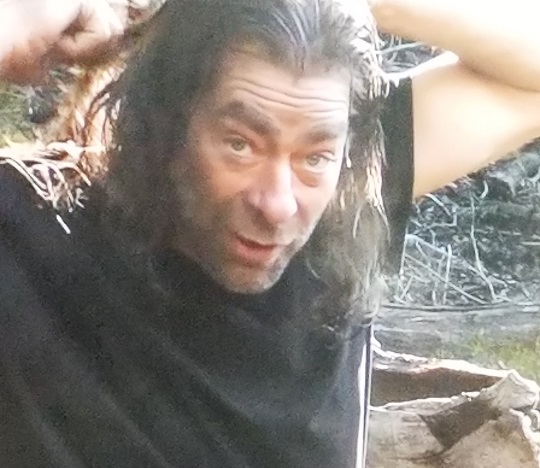 Greg is 53 years old. Greg is a drywaller who lives in Columbia Valley, Canada.

Greg says he enjoys camping in temperatures which are negative 30. He likes camping with his daughter Janette. He has another daughter who lives in Australia. During the testing phase, survivalists called Greg a “true mountain man”.

Greg wants to make his daughters proud, but he is also motivated by the money. He has been hanging drywall for 37 years, and could stop if he wins.

Personally, I think Greg is going to do very well! Maybe he will make it to the top 2!

Greg makes his debut on episode #2

Greg is eating fish about every other day. Greg is in good spirits.

Towards the end of the episode, Greg decides to go try and trap a boar. It looks like he is lost! Oh no!!

Is Greg going to find his way back to camp!?!

#AloneShow Will Greg make it to the top 3?

This episode did not feature Greg, so I am sure we will see him December 29 2016 for the “Outfoxed” episode. In fact, I think that episode is about Greg!

Something has been taking the bait from Greg’s snare traps. He checks his camera, and it appears to have been either a fox or a small coyote.

He says he is going to try and trap and eat that animal, so he can resume boar trapping.

The only problem is, fox are very, very smart creatures. Once you try to trap one and are unsuccessful, they know your system and can sense what is going on.

Get a back up plan Greg like throw a line in the water just in case you don’t catch the smart fox. #AloneShow

This is good advice.

Greg tries to catch the fox over and over, but he is “outfoxed”. I think he is going to tap out…

#aloneshow Is Greg about to tap out????

Greg did not tap out this episode, but he was indeed outfoxed. Britt tapped. That was a close one, it was going to be one of these two guys…

Is this guy going to eat?

Later, possibly a day or two later, not sure, he builds a better raft with more logs. Greg reitterates the financial opportunity, and sets sail.

His raft is cobbled together and looks pretty dangerous. He finds a new spot to fish. He catches a big one. Nice!!!

Hey Greg, if you win there is at least one woman waiting for you!

#AloneShow I like how “Greg” thinks about building his daughter a home. Heck, if he wins; I’m single, he’s single…..just sayin’…..lol

Greg is in this episode!

Greg has been burning calories chopping wood. He has been living off of berries and a few fish. He is discussing relocating his camp.

Later, he catches a fish! The fish is tangled up in the weeds. He goes out to get it. He succeeds in doing so but falls into the water. The water was 42 degrees – very cold. Go dry off Greg!!

Let me know what you like or dislike about Greg! Would you make your shelter the same way? Bring different items? Comb your hair differently? Tell me about it!