The contestants arrive in Desert Canyon, Utah. The temperature is 109 degrees.

A little after noon Jason is hot. I would not want to be in his shoes at this point. In fact, I’ve never personally experienced 109 degree temperatures.

He gets some shade in an old cabin that he runs into. The cabin may have been a building for uranium miners at one point. In the building he locates a cast iron skillet, which he takes along for his journey.

Seeking relief from the sun and to lower his core temperature he takes a dip in the river. The river has calcium sulphate in it so he is not supposed to be drinking it.

Later, Jason finds flint, which he later uses to get a fire lit. Apparently flint in this part of Utah has a red tint to it. Cliff helps Jason identify the rock via the noise it makes. The flint sounds like a thick glass bottle when another rock bangs against it.

Lighting the first proves to be no easy task. Then once the fire is lit, Jason’s fire evaporates in the skillet before it has a chance to boil. This is very disappointing. At around 2:30AM Jason grabs some more water and by 4AM he has finally had some water and gets some sleep. His supper consisted of a wild onion and some cactus.

The next day temperatures reach over 110. Jason presses on and makes it to his extraction point! 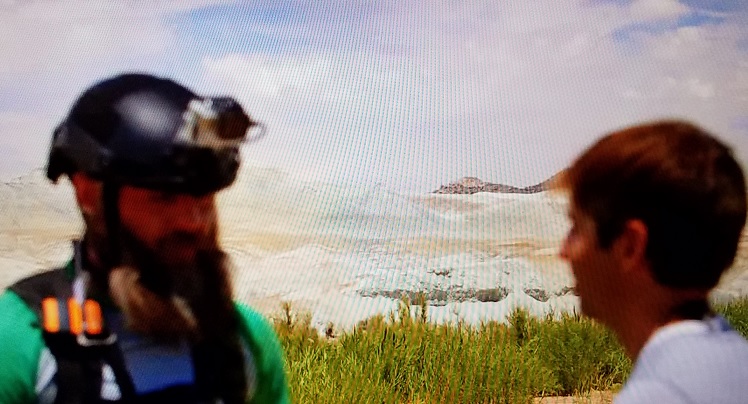 Colby Rains is from St Louis Missouri and is confident he is going to conquer the desert. His survival expert is Alex Coker.

A few hours in and Colby is not happy with the weather conditions. Alex has Colby on the lookout for wild horse dung for a fire material. Colby locates some and puts it in his pack.

Colby travels along a river which is also high in calcium sulphate so he can’t drink it. Colby is hot and questioning why he is on the show at this point and becomes angry.

By evening Colby is downright pissed off and his attitude is at a low. Alex assists him in locating a cattail to eat for some food and moisture but Colby spits it out after taking a bite of it.

They also locate water which has tadpoles in it- this would hydrate and feed Colby but Colby says it looks like sewage and a cess pool and refuses to obtain any.

Colby ends up giving up and getting evacuated. He could have pushed through though. I wonder if Colby regrets his decision to come on the show, or if he regrets pulling out, or maybe he is happy with  the way things went, who knows. Either way, it was a very tough environment.