This episode, “Long Way Home”, originally aired January 20, 2016 and is a continuation of episode 1. Grady and Bill are trying to survive in the Chilean Andes.

Grady and Bill are very cold. They were unable to get a fire started.

Bill snuggles into a pile of debris in an attempt to keep warm. Before he goes to bed he reveals that he spent 10 years working for and training under Tom Brown, the famous tracker. He says one of Tom Brown’s sayings was

“If you’re gonna be dumb, you’d better be tough.”

In an effort to survive and locate water they begin following a feral pig trail.

Along the way Bill shouts when he discovers a tree which is known to grow near water. Grady is startled and baffled by Bill’s behavior. Bill always seems to be hugging a tree.

They continue following the signs of water and they discover a river. When they approach the river Grady discovers a rare spring spewing water up out of the river.

Water had been a concern as the volcano in the area could have made the water hazardous to ingest, but they were able to drink the spring water with no problem.

After Grady & Bill hydrate they argue about leaving and decide to stay. They then secure shelter and Bill finally gets a fire going. After the fire is lit Bill becomes very emotional and appears overwhelmed with happiness. 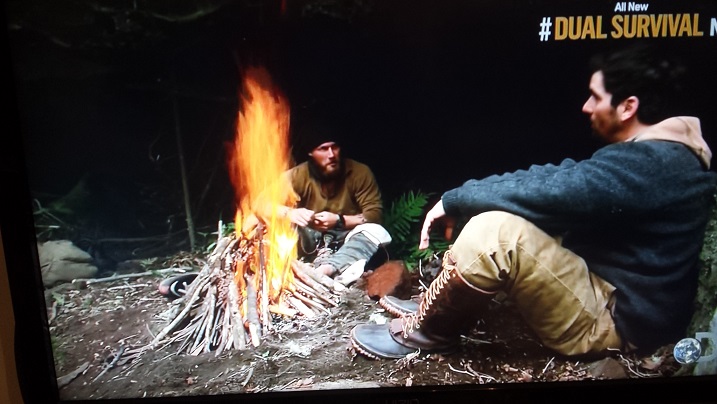 Grady and Bill by the fire

With water, shelter, and fire in place, they are ready to look for food.

Grady sets out to find a place to funnel the pig. He finds potatoes while Bill fashions a spear using a stick, cording, and obsidian rock which he found near a volcano the day before.

Grady carefully guide a pig to Bill who is able to spear it. The pig runs and bleeds out.

Bill insisted the pig was given space while his spirit or energy left the body, then he moved in for the pig.

Over dinner Grady and Bill bond and trust grows.

The next morning they head down the river and out to the ocean side and the episode is over.